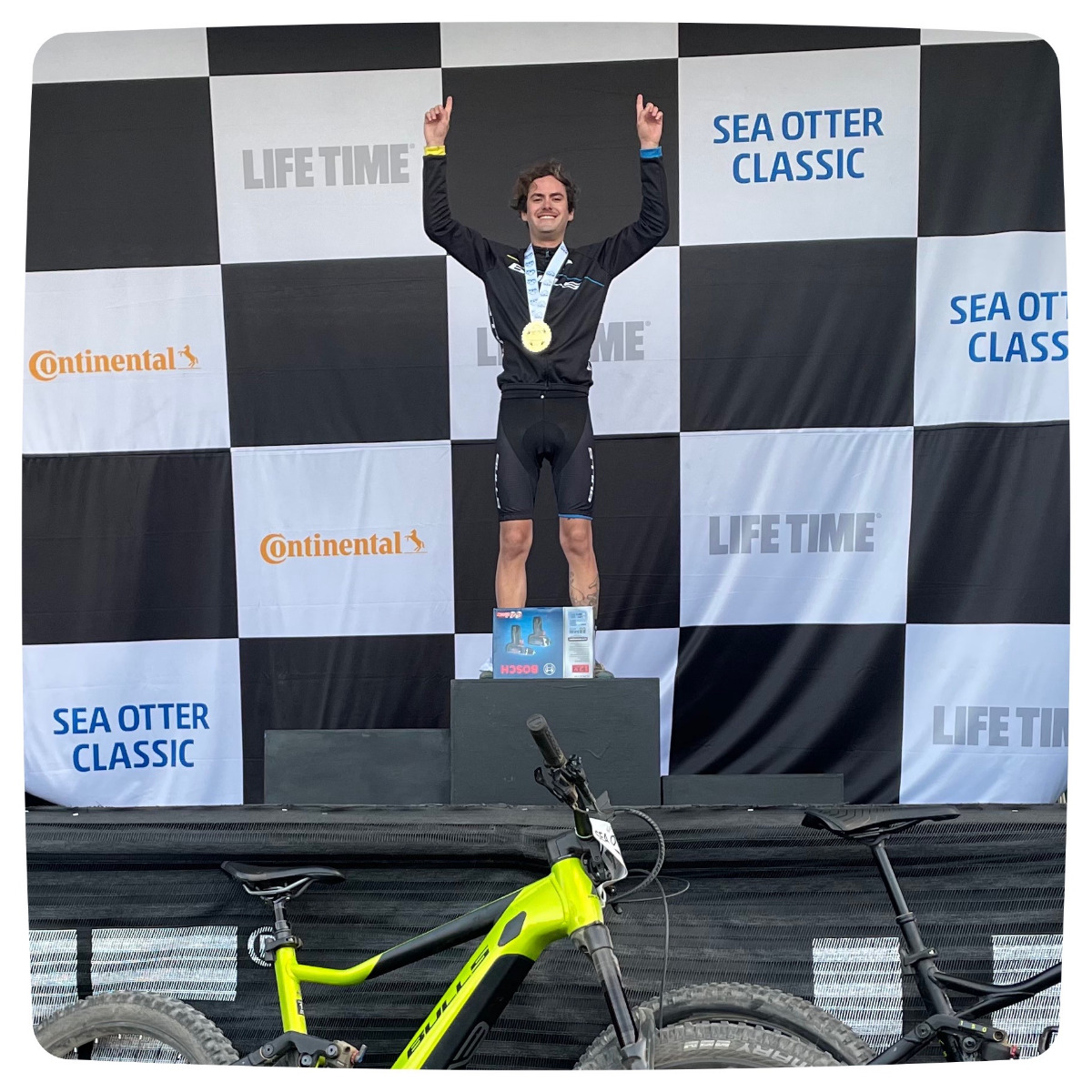 The dust has settled from the 2021 Sea Otter Classic and we’ve had some time to reflect on the great moments of the weekend, including the BULLS EMTB Race, e-powered by Bosch! As a relatively new race format, the EMTB race offers a sense of camaraderie that doesn’t often exist in more established race disciplines.  Like cyclocross races of the 1990’s or fixed gear alleycat races of 15 years ago, this year's Sea Otter EMTB Race felt relaxed, but energized, racy and fun, all at the same time.

As race time drew near, the staging area began filling with quite a variety of EMTB riders:  from full-face helmets and pads to sleek lycra team race kits, from ages 15 to 80, from top shelf carbon builds to budget-friendly AL hardtails, from experienced racers to first timers… one thing was clear: everyone was smiling and ready for a good time.  Racers were called to line up first in the Open Category, with age-specific categories right behind.  This second group had no order or staggered start, and interestingly, the front row was filled with mostly white-haired women and men, ready to put the pedal to the metal!

EBike proponent and California Congressman Jimmy Panetta led the countdown to “GO!!,” and the race launched forward like a criterium, everyone hitting the Class 1 speed of 20mph within seconds as we left the Tire Bridge behind and headed into the first climb of the course.  A bottleneck quickly formed on the hill top as the course shifted to tight and loose singletrack, eventually opening just wide enough for a couple well-timed passing zones as the trail again pointed upwards.  Looping back toward the parking lot, two short rock gardens made full use of suspension travel and then a punchy quarter mile 15% climb stretched out the competition as the course headed east away from the festival grounds.

Once on top of the hills, we sped down a wide washboard section that ushered us back into the trees on soft and dusty singletrack, eventually pointing us back toward the Laguna Seca Raceway.  Descending into the fencing around the track, we raced on gravel, making a big sweeping turn back toward the Tire Bridge to complete the first lap on tarmac. 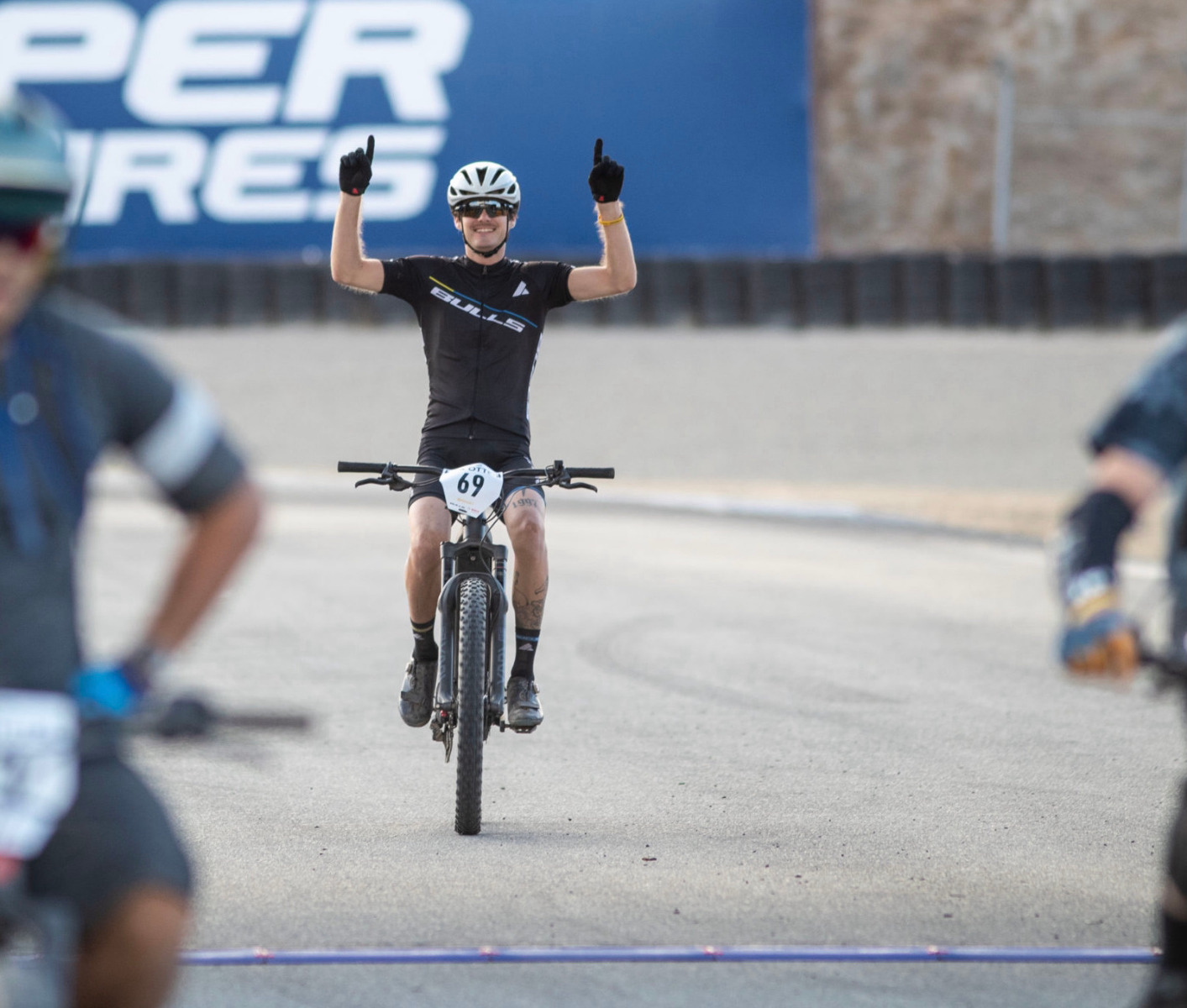 Riders spent between 11-25 minutes per lap, getting more familiar with the course as the race went on, learning where to pass and where to allow the motor to do all of the work.

After an hour and nine minutes, race leader and Team BULLS rider Christian Husband took first place, having almost passed out on the final lap to ensure the victory.  A couple minutes later BULLS Rider Chris Kernaghan took first in the Men’s 40-49 and 6th overall, while Pete Anderson rode a BULLS Copperhead EVO AM 4 to a second place finish in the Men’s 40-49 category, Wrapping up the BULLS demo fleet riders was 65 year old Aussie Bob Horne, who took 11th in the 60+ category on a BULLS Monster E FS fat bike, and we couldn’t get him to stop smiling if we tried.

Being the last race of the day, finishers lingered around the finish line, sharing stories of crashes, passes and tips for next year’s race. Is it better to jump the rock garden or monster truck through it?  Should you save energy for the climbs or push past the motor limit on the flats?  Hydration pack or water bottle?

If you’re new to eBikes and want to put one through its paces, or want to take your personal eBike into new territory, an EMTB race is the perfect place to push your limits.  Join us April 7-10, 2022 as the BULLS EMTB Race returns to the Sea Otter Classic for its normal spring dates.