We first introduced you to Janet and Stephen following their 12,500-mile circumnavigation of the U.S and part of Canada in September 2019 and we continued to follow their adventures right up until COVID hit.  We recently checked back in with this vivacious couple to see what they’re up to, and as it turns out, they’re up to a whole lot... of miles- almost 30,000! These silver heroes- Janet is 66 and Stephen is 74- have weathered many more miles in the midst of a pandemic, a scary crash and even prostate surgery.

In a recent conversation with Janet, she recapped that after their one-year perimeter trip they kept riding, doing local club rides through most of the winter and headed off for a bike trip to Arizona in the spring of 2019. Just as they were finishing up their AZ tour, COVID-19 hit & they hightailed it home before states started to close!

Reflecting on the past sixteen months, Janet shared, “Fortunately, riding our bikes was the safest activity for us during the pandemic. A small bubble of us continued to get out and ride three days a week. In June 2020 we headed for eastern Washington and Idaho to explore the Centennial and Coeur D’Alene Trails for a week. (We saw half a dozen moose along the trail which was so exciting!) We wore our masks and maintained our six-foot distance, and no one came down sick. It’s also been nice because traffic was low, and we had the roads all to ourselves for a while.”

In July the club headed to a former member’s home in Silverton, OR for several days of local rides before heading southeast to Bend to wrap up their week’s bike adventure. Two months later,  they organized a trip up to the San Juan Islands for several rides. Stephen and Janet went up first and rode Guemes Island on Day 1, San Juan Island on Day 2, Orcas Island and Mount Constitution on Day 3 and Lopez Island on Day 4. “We had a great time, and still, no one got sick,” Janet told us. 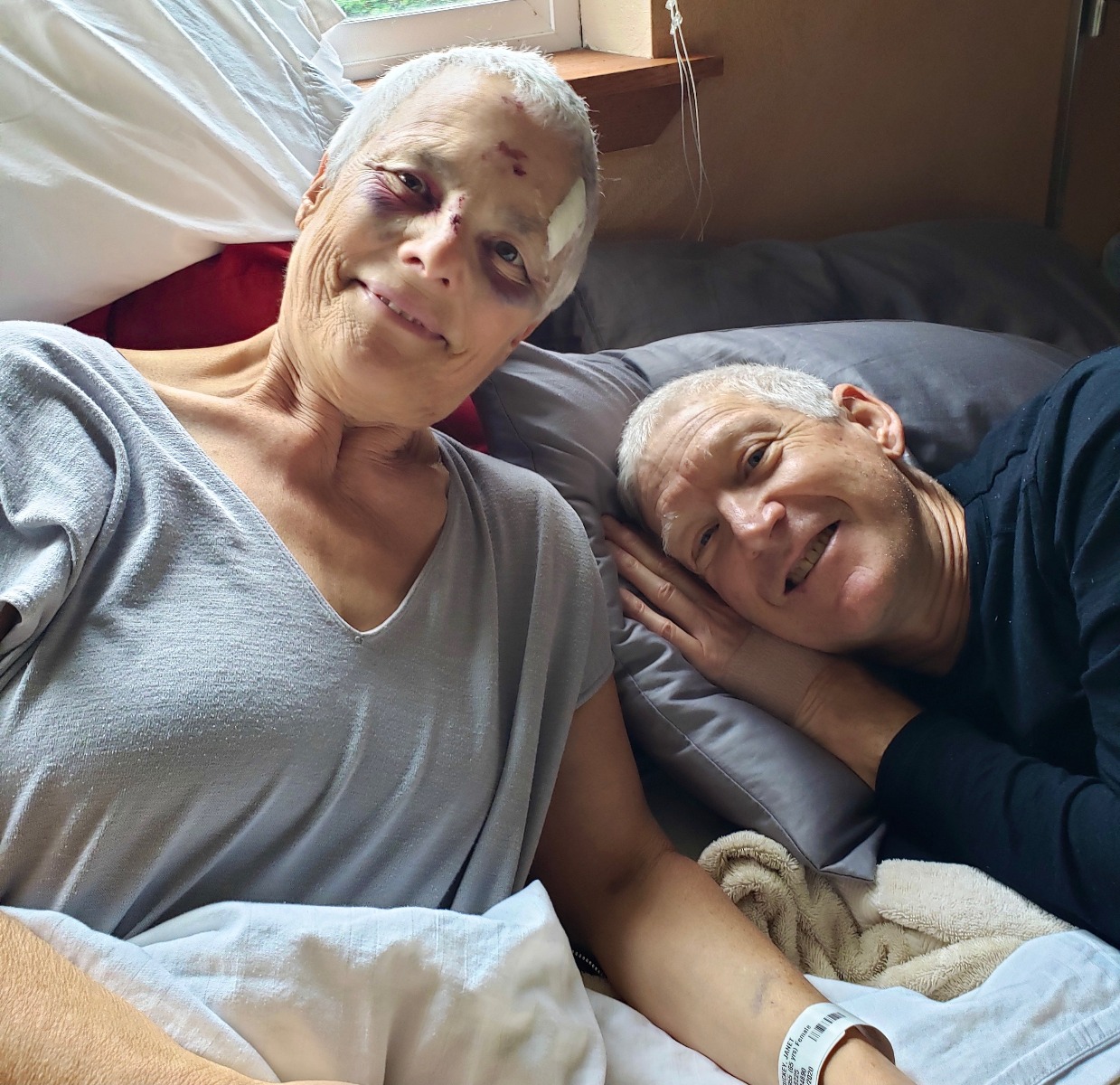 Janet also shared about some unexpected adventures on and off their bikes. “I kept leading rides back at home, but in mid-October (2020) I flew off my bike in the rain. I broke my nose, fractured my pelvis in three places, suffered blunt force trauma to my chest and sustained a head injury. As if this wasn’t enough, Stephen had prostate surgery 2 days after my crash.” Having sold their homes a couple years ago, opting for greater freedom to ride, Janet and Stephen were renting a second floor studio back house.

Following Janet’s crash and Stephen’s surgery,  neither could get up the stairs to their apartment, but in a whirlwind of good fortune, they were able to move into the front house and then purchase it within the month! “The house is just under 900 square feet, right on the beach and we love it! Perfect for our retirement years!”

“Within four weeks of my crash, I was on the trainer on the deck using a bike someone loaned me so I could get back up riding again. I was back on my electric bike within six weeks and doing club rides again. After four weeks off, Stephen was back riding as well.  We rode through the winter, leading rides and were very grateful when some of the usual ride leaders returned to help me organize rides this past Spring!”

Since their recovery, Janet and Stephen completed their first group tour around the Olympic Peninsula, about 450 miles, this past spring (2021) with their usual group and just spent another week up in the San Juans for their second annual island tour.  They also rode Mt. St. Helens and Mt Rainier in June, racking up 7,000 feet of elevation gain over 85 miles. 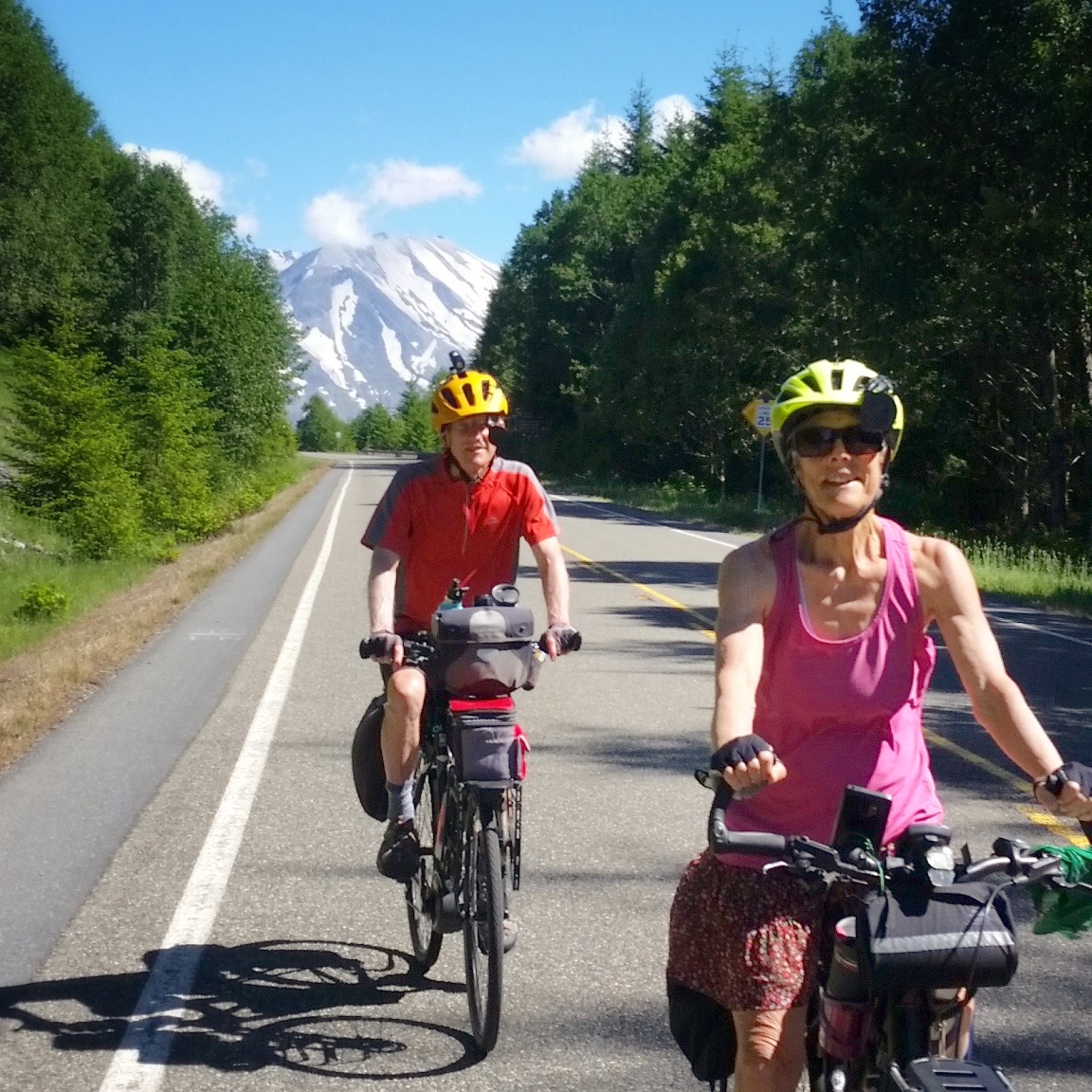 We asked Janet how their relationship fared after 30 years and countless miles.  She confided that in their first few years, before eBikes and GPS, it was hard and that they had to learn each other’s signals and rhythms. But now, she knows when Stephen says he’s getting hungry, it’s time to stop. They know their limits and they really like each other. Janet remarked, “Love isn’t enough. You really have to like each other and I really like him. We just get along so well.”

Janet reports that the odometer on her BULLS Cross Lite E rolled over 28,000 miles this week and is still going strong! They expect to surpass 30,000 miles this year, with trips planned this Summer and Fall  to Hurricane Ridge and Hood Canal, followed by Eugene in later months.  Continuing their adventures into 2022, Janet and Stephen are planning a spectacular 1,200 mile bike tour, pedaling north through Glacier National Park into Alberta, exploring Calgary and Banff.

Stay tuned for more adventures from Janet and Stephen.